Joseph Klein, an early settler to arrive in New Braunfels in 1845, received his allotted grant of land on April 1848. Klein improved the lot and built a dwelling that was occupied for many years until it was sold on February 16, 1859 to William Kuse, whose family held it for almost a century. 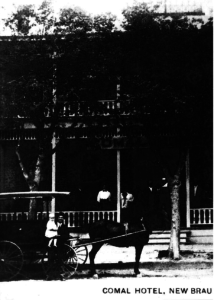 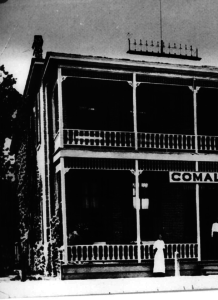 The historic Comal hotel structure was planned in 1897 and built in 1898-1990 by New Braunfels builder Christian Herry, after the site had been cleared by removal of the dwelling built by Joseph Klein. The hotel was situated on the corner of East San Antonio and Market Streets. The hotel was built by Emilie Kuse Eggeling on property owned by her parents, Mr. and Mrs. William Kuse.

Emilie Kuse Eggeling was recognized as one of the early entrepreneurs of New Braunfels. At the time the Prince Solms Inn was being built, Emilie was already operating the most successful hotel in the city, the Plaza Hotel, as well as a thriving grocery store across the street from the Inn. The overflow of business at the Plaza led to the demand for a new hotel. The structure owes much of its style to Emilie.

On September 6, 1955, the Comal Hotel was sold to Bill and Nan Dillen, who were admirers of old buildings. Bill Dillen was extremely pleased to purchase the structure because of its unusually fine conditions. From the time the hotel was built until it was sold to the Dillens, it was operated by Emilie Eggeling or her children. The Dillens upgraded the hotel’s interior and had the entire structure rewired to meet the Southern City Building requirements. 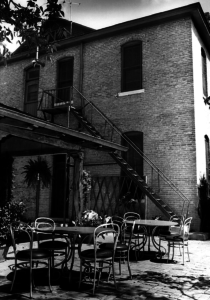 In 1958, the Dillens had the hotel’s patio and garden area constructed. All of the stone and wood used for the construction were of historic significance. The large stones which comprise the patio floor, the back entryway to the hotel, the front entryway from the front on East San Antonio Street, then for the steps down to the basement, were saved by the Dillens when the old and original Comal County prison was torn down. Bill Dillen became dedicated to perpetuating the use of the hotel and renamed it the Prince Solms Inn in honor of the city’s founder. He adhered to all updates by keeping décor within the framework of the Victorian era. 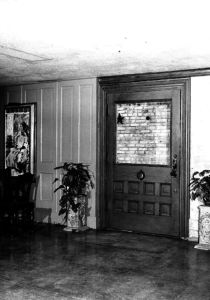 In 1977, Betty Mitchell and Marge Crumbaker purchased the hotel and had it refurbished with choice antiques of its age, or earlier, and continued its use as an inn. In 1978, two bathrooms, four air conditioning systems, plumbing, and electrical work were added to meet the New Braunfels City Building Codes for the addition of a cocktail bar in the basement. Old lumber from a Victorian house in Comaltown was used for the construction of the cocktail bar. The bar was designed in keeping with the hotel’s Victorian architecture. The bar was named Wolfgang’s Cellar in honor of composer Wolfgang Mozart. It was during the ownership of Mitchell and Crumbaker that The Prince Solms Inn gained popularity and became a favored place to vacation. 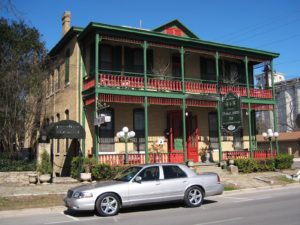 The Prince Solms Inn is in as perfect shape as its current owners can make it. Great attention has been given to the repainting of all inside and outside the trim, re-wallpapering the rooms, refinishing the floors in the parlor and adjoining office, re-caulking the windows, painting the tin roof with rust-retardant materials, repairing broken metal facing, and digging away years of dirt and collected grass from the front walk to reveal a beautiful brick area.

It is the hope of the current owners, Terry & Celina Muckenfuss, that the Prince Solms Inn will continue through this century as a beautiful example of how things were in the early days of New Braunfels.